The latest album was a bit of a departure in sound, though not in mood. It took some finagling to get the sounds used on the album, and I’ve received a few questions regarding this.  I’m not going to share all the secrets (mainly because some of it was complicated beyond the scope of an article), but I’ll let you know what VST plugins I used for the chiptune sounds and what effects VSTs I used on them (all links will be at the bottom of the post). Let’s get started with the most important ones:

These are extremely useful. I mostly used peach, rebar, tapeworm, and monomate on this album.

Peach has a massive selection of classic sounds named after classic game characters. I used several of these sounds with a little echo or reverb, and that’s about it.

The various sounds from Peach were most prominently featured on “Daemon Construct”. You will hear the blips and rapid chirps during the song, especially during some of the crazy double bass sections.  Also, some of these sounds have great vibrato built in, which is great for sustained notes. 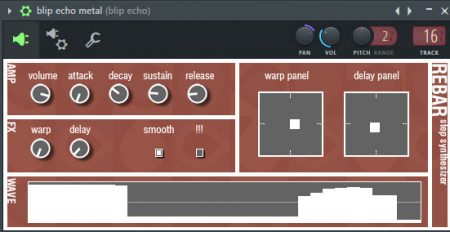 Rebar is maybe my favorite because it can produce everything from an accordion to a harpsichord.  This one is a bit more complicated to use because you have to structure your own waveform. This gives you tons of control and freedom, but you might end up fussing with it a lot. Just be sure to save your preset after you get to something you like.

This VST also features a warp and delay panel, so it can be good for eerie, weird, or strange sounds. My primary use was as a hollow sounding plucked instrument. You will hear this as soon as the album starts, strumming away during “Lurker of the Blue Forest”.

Monomate can be a strong and haunting lead with just a bit of reverb. Without it, it can be a little harsh. This might not be so bad for standard chiptune music, but for this album it would have really sounded off. So, I equalize it and add a healthy amount of reverb and it cuts through while still fitting in.

This was my lead in “Drowning the Dreadnought”, “Eye of the Hylageamon”, and it was heavily featured on “Pirates of Stargazer Island”. Lastly, Monomate is an awesome chiptune bass. Play with some of the presets and try a walking bass line. It’s spot on. 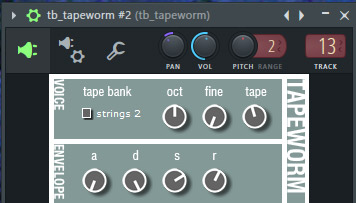 Tapeworm is a VST that can almost take credit for much of the signature Zweihänder sound over the years. The choir is weird and awesome. I use it in most songs to fill in the gaps and add a little something. It is actually my go-to when I want to reach for a pad (as an alternative). Rather than creating an airy soundscape it allows me to create something spooky, mysterious, and sometimes ominous.

The strings are also quite useful. There is a darker version and a brighter version. I tend to use the dark version as it reminds me of a dungeon or cave level from an old video game.

I’ll get the the free effect plugins I use soon. First, let’s continue with the synths.

This plugin is simple, clean, and it sounds amazing. It makes it very easy to create that classic NES/Super Mario Brothers sound. This is mainly due to the fact that it is extremely simple. You pick your wav shape (square, triangle, sine, etc.), tweak a few settings, then you are good to go. I use it on most tracks, some more sparingly than others. The paid plugins sometimes replace it due to their ability to add another wav as an LFO or something. This is still something everyone should have in their VST library.

ProtoPSG is another that is similar to Magical8bitplug, but is has a few more options. I recommend checking it out too.

There are only two paid plugins that I continue to reach for. They mainly give me more options and allow me to create songs way faster than I could if I were forced to try to create similar sounds using other VSTs or combinations of other VSTs.

This plugin is extremely epic. It offers emulation for tons of old boards, has some OK presets, and lets you layer tons of instruments to make some crazy sounds.

Beyond that, it lets you create arpeggios, control echo, reverb, and a ton more.

I used this one for most of the guitar sounds. I would start with fifths (easy to create with the VST) then I use one of the free amp plugins to crank up the gain. This is the key ingredient when it comes to getting the metal crunch. I also used it for some of the haunting leads and pads heard throughout the album, for instance, the lead instrument before Monomate kicks in on “Drowning the Deadnought”. 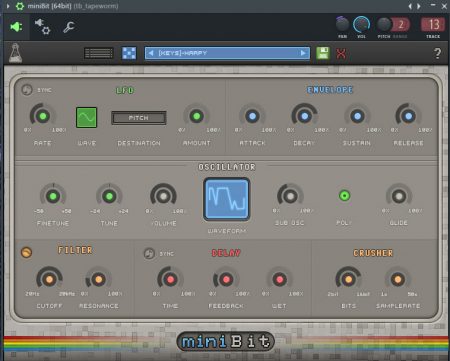 Mother of the goat, this plugin really made this album. It was well worth the $20 or so that I paid for it. First, the waveform selections are beyond most plugins. It’s almost as good as drawing your own wavform, and a hell of a lot easier.

The crunchy guitar sound at the beginning of “Drowning the Dreadnought” was easily achieved by simply picking an interesting LFO, then messing with the the oscillation rate. You can control the speed of the oscillation and then “amount” governs how much of a stuttering sound you get through volume modulation during the oscillation.

Beyond that, you get to choose separate waveforms for your LFO and sub osculation. It basically gives you two sounds at once. Next up, you have your glide nob so you can have notes sliding all over the place, like in many chiptune songs. Lastly, I used the crusher on this a bit. It allows you to take the 16bit sounds and crunch them down to 2. Then you can crank your sample rate and create something gnarly.

If I could only pick one plugin to make an entire album, it would be this one. If I had to choose between this and the free Tweakbench suits that would be a very hard choice, but Tweakbench would win. Tweakbench was basically my first two albums.

The LePou amps are awesome. I used them to add crunch and clarity. There are several available and they do a hell of a job. Mess with them and find the one you like best.

Variety of Sound makes some unreal stuff for free. I mostly used Epicverb as it produces some amazing reverb for leads, but also has a great plate for drums. Also, I used DensitymkIII on every single song. Just throw it on the whole bus and use it to make things louder without losing anything.

Kjaerhus Audio doesn’t seem to be around anymore, and their plugins are hard to find these days. I have used them for a while and could only find a link to their stuff on Acoustica. I really like their classic chorus. It sounds unreal, for free. I would pay money for this stuff. Also, the flanger, phaser, and reverb are all pretty good.

Lastly, for compression, EQ, etc. check out the Reaper free plugins. They just give this stuff away. Check it out in the links below.

SpectreSoundStudios has a great video covering many of the plugins I mentioned here. I learned of a couple of them from him and was already using the LePou amps and the Kjaerhus stuff.

Let me know if anyone wants to see a video of this stuff. Also, let me know which plugins you use and if you have a recommendation, please put it in the forum.